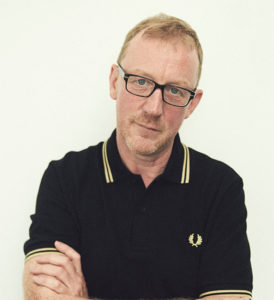 Dave Rowntree, Blur drummer extraordinaire and songwriter, was responsible, along with fellow SMA Talent composer, Ian Arber, for the score for the BBC1’s hit The Capture which received universal acclaim from the critics and viewers alike. The pair are putting the finishing touches to a major new series to be broadcast later this year.  They also worked together on Bros: When The Screaming Stops which went viral at the end of December 2018. It continues to be the most talked-about documentary on tv.  He was nominated in July 2018 for Best Music in the Independent Horror Film Awards for his score for Andrea Vinciguerra’s short Teeth and Pills vimeo.com/258807676

He joined SMA Talent in 2017 to concentrate on his developing career as a film and TV composer. His music is exciting, edgy and brings something different to the table.  He worked on Fulwell 73’s feature White Island as well as the feature documentary Mo Farah – No Easy Mile, also alongside Ian Arber.  He’s scored several shorts including The Mock Room, Not Waving.

In 2004 he set up animation company Nanomation and directed 2 series of the South Park-esque show Empire Square which screened on Channel 4 in the UK and Fuse in the US. When Blur took an extended break in 2006 David decided to train as a solicitor and practiced criminal law for several years.

Dave met Blur bandmates, Damon Albarn and Graham Coxon, while playing in emerging bands in and around Colchester. On moving to London, the trio was joined by Alex James to form Seymour. After signing to Food Records the band changed their name to Blur and released their first record in October 1990.  Over the next 25 years, Blur developed into one of the most successful British bands of all time winning more than 40 major international awards including 5 Brit Awards. In 2016 they were again nominated at the Brits for Best British Group, the 20th nomination they have received from the Academy.

Blur are prolific songwriters, releasing 8 studio albums, 13 live albums and compilations, and nearly 30 singles. They’ve regularly topped the UK and international charts, and their last 4 albums made the US Billboard charts – no surprise then that their songs have frequently featured in multiple films and TV shows since 1996.

Dave was brought up in a musical household, his mother is a violinist; his father a BBC sound engineer, who worked on early sessions by The Beatles and Cliff Richard.  David studied music and percussion at the Landermere Music School but worked as a computer programmer before the music biz claimed him.

Music from The Capture